The Orinoco symbolizes all that is mysterious, wild, and wonderful in South America and makes for a spectacular alternative to the over-visited Amazon

The Orinoco will not fail to delight even the most jaded traveler. The Amazon may be bigger and better known, but it doesn’t provide direct access to the continent’s most astonishing wildlife and scenery the way the Orinoco does. This mighty river system is home to some of the world’s most biodiverse ecosystems, and runs a breathtaking topographical gamut, from tall mountains and tropical forests to humid llanos (plains) and marshy deltas, before finally emptying into the Atlantic.

For centuries this mysterious river has intrigued explorers and adventurers. The mouth of the Orinoco was sighted by Columbus in 1498, but it was not until the 1950s that explorers finally stumbled upon its headwaters at Cerro Delgado Chalbaud, one of the most remote spots in the western hemisphere, located high up in the Parima Mountains on the border between Brazil and Venezuela. Even now there remains some doubt about the river’s true source, and several of its tributaries have yet to be explored.

There’s no doubt that the Amazon, a long-time favorite with explorers, remains a big draw for travelers. It is, after all, a superlative among rivers: it is the longest river in South America (some say the world), has the largest drainage basin on earth, and, by dint of its sheer size, is home to a staggering array of flora and fauna.

But what will you really have a chance to see here? The few towns teem with tour operators and travel agencies, all of which charge top-end prices, but few of which deliver. Hardly any of these tour operators are located on the river. And then there’s the Amazon itself – unlike the Orinoco, parts of it are literally impassable, and the foliage is often so dense that you may not be able to see much of anything.

For those who feel they must see the Amazon at all costs, one option is to fly to Manaus in Brazil and start the journey there. The city’s central location and innumerable tour operators will make your planning easier.

Getting There and Around

Many travelers choose to start their trip at the mouth of the river, which is northeast of Ciudad Guyana in Venezuela, and stock up on provisions in the city. There are many reputable tour operators here, who will take you around some remarkable sights, including picturesque waterfalls and pools, before you get to the river.

On a river excursion like this, you will probably have your own food onboard. However, it’s likely that you will stop off at several towns along the river, where you’ll have the chance to sample local food ranging from traditional chicken[1]and rice-based dishes to more exotic flavors, including ostrich and even piranha.

Although you’ll probably spend most nights on the boat, the town of Caicara de Orinoco, 373 miles (600 km) southwest of Ciudad Guyana, is a perfect stopover point. The Hotel Miami (tel. +58 35 67 587) here is comfortable and inexpensive and is also only a stone’s throw from the town’s best restaurant, Caicara del Orinoco

The Orinoco protects one of the last pristine ecosystems on the planet and boasts the highest biodiversity rate of any river system. Nearly a dozen new species are discovered along its banks every month. And the river’s mouth, the Orinoco Delta, is thought to be the continent’s richest area in aquatic biodiversity. At last count, this still largely uncharted river was home to more than 10,000 plant species, 1,400 bird species, 1,200 fish species, and at least 340 different types of mammals. You won’t find those numbers anywhere else on earth 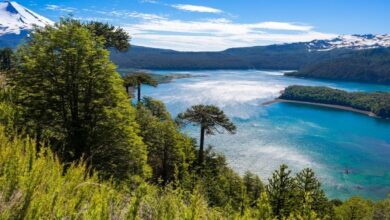